Bob Iger: If Steve Jobs Were Alive, We Would Likely Have Combined Apple and Disney

Disney CEO and former Apple board member Bob Iger has a new book coming out later this month, and ahead of its release, Vanity Fair has shared some key excerpts about Steve Jobs, who was Iger’s close friend.

When Iger first took over as CEO of Disney, the relationship between the two companies was strained due to Jobs’ disagreements with Michael Eisner and the end of a deal that had seen Disney releasing Pixar films. 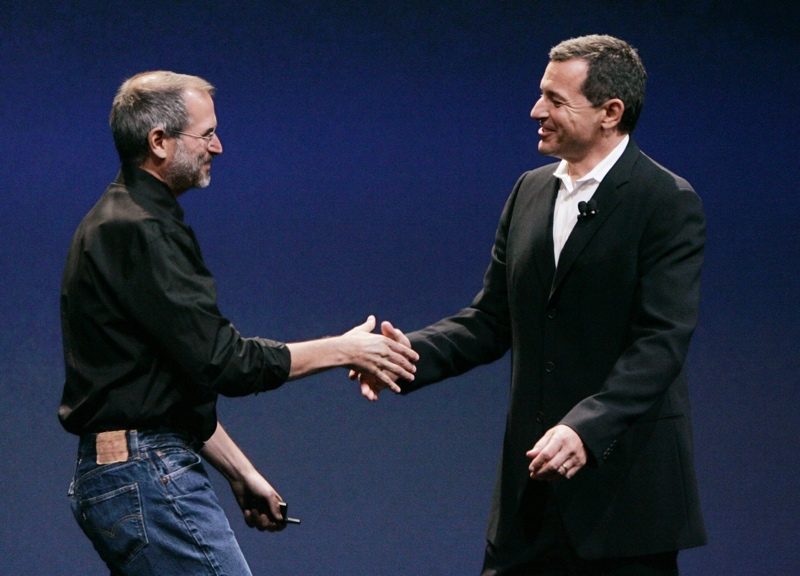 Iger broke the ice with Jobs and rekindled a relationship by praising the iPod and discussing iTunes as a television platform.

I’d been thinking about the future of television, and believed it was only a matter of time before we would be accessing TV shows and movies on our computers. I didn’t know how fast mobile technology was going to evolve (the iPhone was still two years away), so what I was imagining was an iTunes platform for television, “iTV,” as I described it. Steve was silent for a while, and then finally said, “I’m going to come back to you on this. I’m working on something I want to show you.”

Jobs went on to tell Iger about the video iPod, and asked Iger to put Disney TV shows on it, which Iger agreed to, leading to a solid friendship between the two and ultimately, a new Disney/Pixar deal.

According to Iger, in 2006 just ahead of when Disney was set to announce its acquisition of Pixar, Jobs told Iger that his cancer had returned and spread to his liver, giving Iger time to back out of the deal.

He told me the cancer was now in his liver and he talked about the odds of beating it. He was going to do whatever it took to be at his son Reed’s high school graduation, he said. When he told me that was four years away, I felt devastated. It was impossible to be having these two conversations–about Steve facing his impending death and about the deal we were supposed to be closing in minutes–at the same time.

After the acquisition, Jobs underwent cancer treatment and served on Disney’s board as Disney’s largest shareholder. He weighed in on important Disney decisions like the acquisition of Marvel, and even vacationed with Iger on occasion. “Our connection was much more than a business relationship,” wrote Iger.

Iger says that with each Disney success, there’s always a moment where he wishes Jobs was there, and further, he believes that if Jobs were still alive, the two companies may have merged.

With every success the company has had since Steve’s death, there’s always a moment in the midst of my excitement when I think, I wish Steve could be here for this. It’s impossible not to have the conversation with him in my head that I wish I could be having in real life. More than that, I believe that if Steve were still alive, we would have combined our companies, or at least discussed the possibility very seriously.

“The Ride of a Lifetime: Lessons Learned from 15 Years as CEO of the Walt Disney Company” is set to be released on September 23, 2019. It can be pre-ordered from Amazon for $19.60.

The full excerpt, which has a lot more on the history of the deal between Disney and Pixar, can be read over at Vanity Fair.