Join Transform 2021 for the most important themes in enterprise AI & Data. Learn more.

Fetcher.ai, a recruitment platform that combines AI with human teams, today announced it has raised $6.5 million in a round led by G20 Ventures. The company, whose latest funding round brings its total to $12 million, says the funds will be used to expand the size of its workforce.

In 2020, talent shortages in the U.S. rose to historic levels, with 69% of employers reporting having difficulty filling jobs, according to a ManPowerGroup survey. This isn’t easily remedied. A report by the Society for Human Resource Management found that filling an open position costs employers an average of $4,129 and takes roughly 42 days.

Fetcher was founded in 2014 as a consumer-centric messaging app called Caliber, which focused on professional networking. After a couple of years running Caliber, Fetcher’s cofounders uncovered an opportunity to automate the functionality they had built into their free consumer app to create a paid software-as-a-service product that helped companies fill roles.

Fetcher’s AI-powered platform provides enterprises with an internal team that trains and monitors data to deliver a pipeline of candidates. After a recruiter uploads a job description and provides some initial feedback, Fetcher’s algorithms look for talent that might match those needs, aggregating candidate information from across the web.

Fetcher offers insights into how many prospects might be needed to ensure a hire and automates outreach accordingly. With the platform, hiring managers can track metrics, including open rates, response rates, and interview booking rates. They’re also able to sync their calendar to create meetings, add scheduling links to email templates, configure availability, and block out times based on a preferred schedule.

“Fetcher … provides the ability to turn on ‘automated sourcing,’ allowing for the platform to run without a recruiter’s intervention. Once the recruiter has trained the AI successfully upfront, automated sourcing simply runs in the background, pushing qualified prospects through an automated email outreach series each day,” a spokesperson told VentureBeat via email. “[This] technology allows recruiting teams to focus more on recruitment marketing and the candidate experience — two pieces of the recruiting funnel that have become ever more important in a competitive job market and with the younger generations of millennials and Gen Z.” 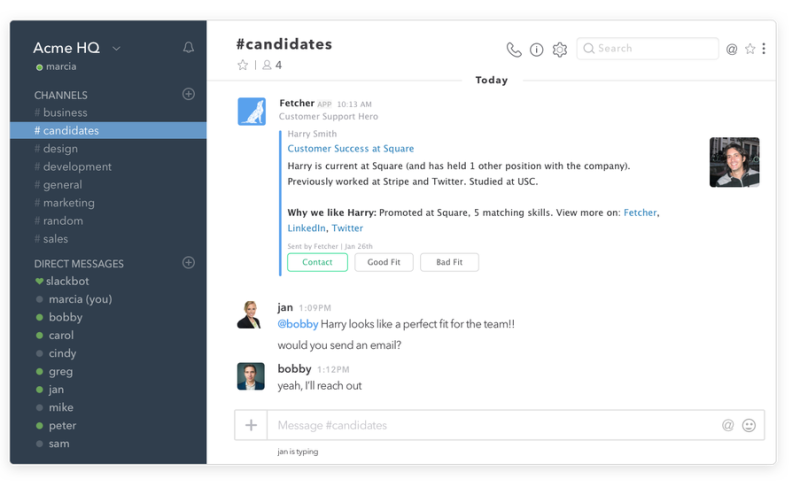 As the pandemic continues, companies are increasingly adopting alternatives to in-person job interviews and talent recruitment. Recruiters PageGroup and Robert Walters last year moved some job interviews and interactions online, following on the heels of tech giants Amazon, Facebook, Google, and Intel. In spite of fears that these tools might exhibit biases against certain groups of candidates, at least a few businesses have begun piloting candidate screenings that ostensibly help recruiters become more efficient, cut down on recruitment costs, and boost overall candidate satisfaction.

Fetcher claims its AI technologies work to decrease unconscious bias while increasing the size and scope of diverse talent pools. Since May 2020, the New York-based startup has partnered with over 150 companies, including Peleton, Behr, and Velcro, and seen revenues increase 10 times, with annual recurring revenue more than doubling in the last nine months alone.

“Fetcher provides diversity metrics, conversion metrics, and more all within the platform. This allows teams to benchmark each role versus the full company, benchmark each recruiter against other team members, and benchmark the company’s metrics against the industry standards,” a spokesperson told VentureBeat via email. “All of these real-time metrics ensure that recruiters are meeting their goals, and if they are not, gives them a clear path as to what levers might need to change in order to get there. Overall, Fetcher provides predictive modeling for pipeline building so that companies can always be ahead of the game when hiring in that department becomes a top priority.”

Alongside G20 Ventures, KFund and returning investors Slow and Accomplice participated in Fetcher’s round announced today. Fetcher has 80 employees.

VentureBeat’s mission is to be a digital town square for technical decision-makers to gain knowledge about transformative technology and transact.

Our site delivers essential information on data technologies and strategies to guide you as you lead your organizations. We invite you to become a member of our community, to access: