How COVID Impacts the Future of Light Rail in Austin – Blogs

It was supposed to be different for light rail this year in Austin.

As of February, the city was booming, the traffic was terrible, and massive numbers of pro-transit progressive voters were expected to turn out for the historic election in November.

The pandemic has rendered unemployment numbers Austin hasn’t seen in decades, fewer commuters as those still employed switched to working from home, and massive economic insecurity is still pervasive, as is a mandate to social distance for the foreseeable future.

Conventional wisdom dictates that it’s the wrong time to ask for a tax rate increase—and not the moment to push for a form of transit whose entire purpose is to get people closer together.

But the pandemic has also brought to Austin some of the softer, gentler urbanism that other cities are seeing. The Healthy Streets program is keeping some roads car-free, the Shop the Block program is letting restaurants turn parking lots into dining areas (only a handful of restaurants are doing it but officials hope that cooler weather will boost participation), and the city just announced that the temporary bike lanes on Congress Avenue will become permanent.

So a massive transit plan that was in works long before COVID-19, Project Connect, is moving forward—though it has been seriously scaled back from the three-rail-line plan that was introduced pre-pandemic.

A history of turning down light rail

Despite exponential population growth and truly terrible traffic, Austin voters have twice in the last 20 years voted down plans for light rail.

The first time, in 2000, the ballot measure just barely failed. But the second time, in 2014, a plan that even a number of transit advocates opposed was widely defeated—by a margin of 14 points.

The centerpiece and starting point of the 2000 bond was a 15-mile light rail line running down Guadalupe Street and South Lamar Boulevard—then and now some of the busiest transit corridors in the city. But the project, which had solid ridership projections and a good chance of federal funding, was defeated by just about 2,000 votes in the high-turnout November 2000 election. That defeat was blamed largely on suburban voters.

That route was not included in the $1 billion 2014 proposal that would have funded a rail line running from ACC Highland, in north-central Austin, through downtown and out through the East Riverside corridor. 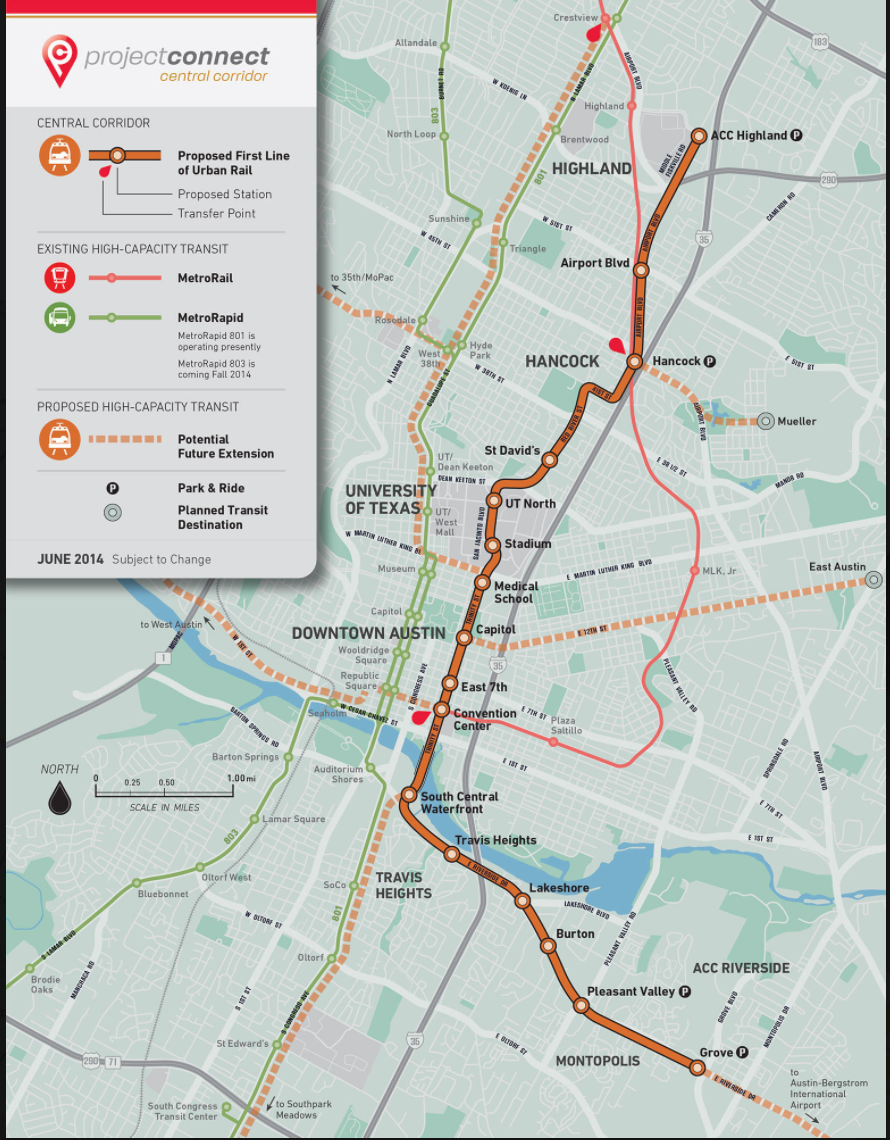 The 14-point loss was partly a result of the usual opposition to light rail projects—those looking to avoid tax increases and greater density. But it was also opposed by some transit advocates who took issue with the route, which was based more on projections of growth than on existing density, and didn’t like that $400,000 of that bond was going for roads.

Or, as one rail supporter who opposed the 2014 plan wrote at the time, “Austinites would be better off building a system our city is proud of and is eager to keep investing in rather than spending the next 20 to 40 years fixing what we got wrong.”

Before the 2014 vote, then-Mayor Lee Leffingwell warned the city that the proposal meant “rail or fail”—in other words, that this was the last chance for rail. (Similar sentiments came up in 2000.)

But that turned out not to be particularly true. By late 2019, Capital Metro released its new plan under the old name of “Project Connect.” 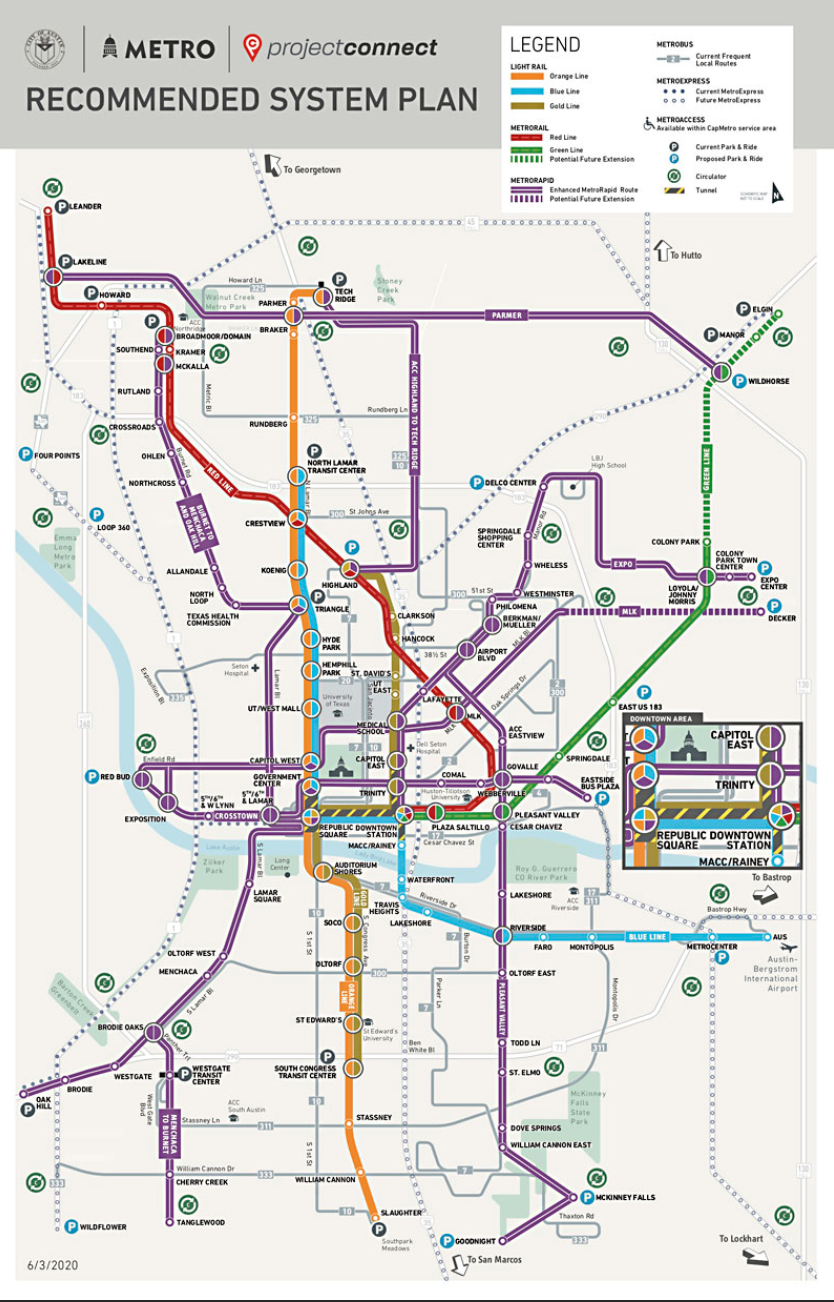 This plan was big—three rail lines and a $2 billion tunnel under downtown Austin that would connect them all, for a total price of $9.8 billion. The routes included the 20-mile Orange Line running from North Lamar, through downtown and onto South Congress; the 15-mile Blue Line connecting the city to the airport and East Riverside corridor; and the late addition of the Gold Line, which would run the east side of downtown.

It was ambitious. But in the face of the pandemic, it didn’t last long. 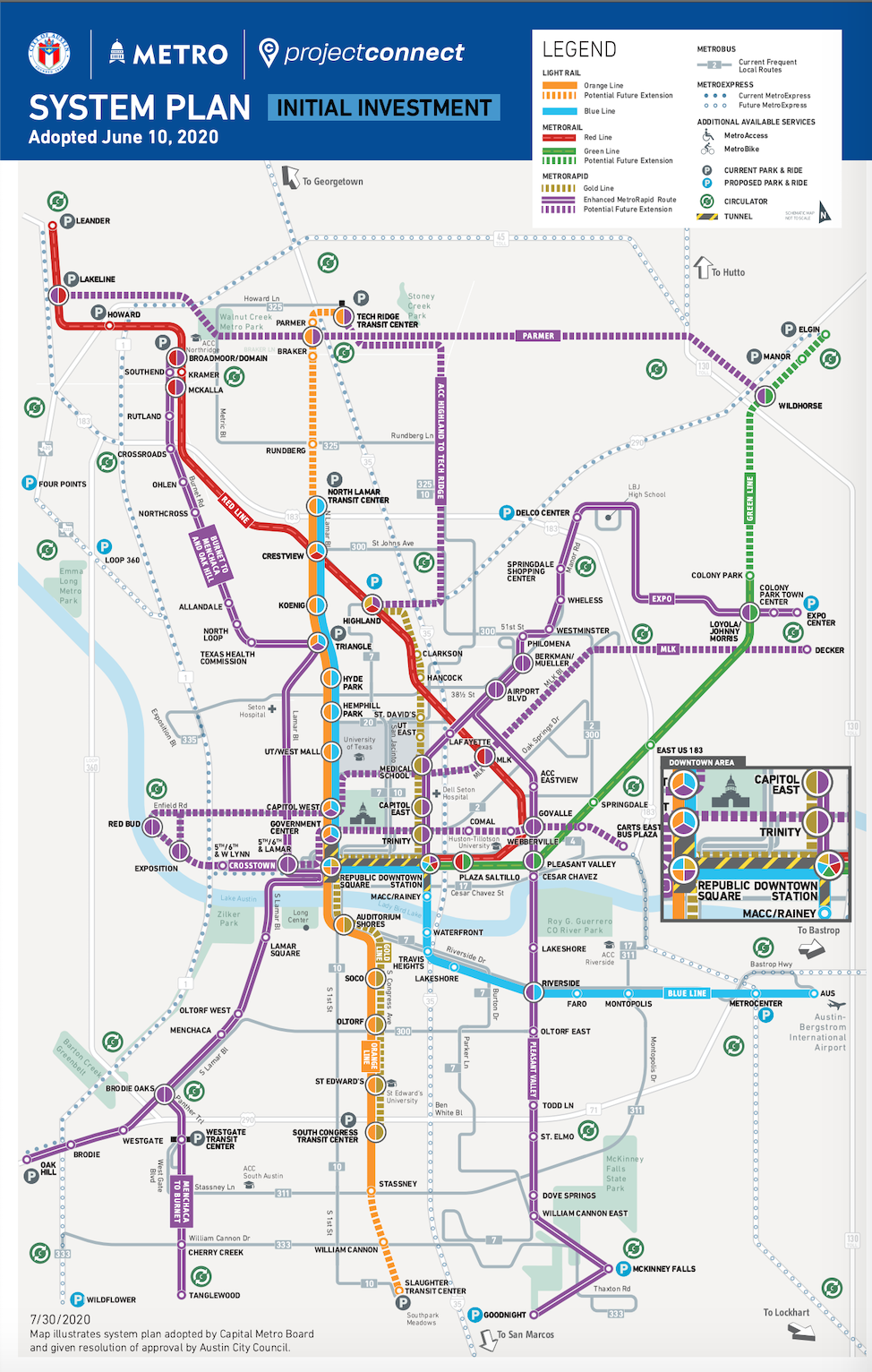 By the time the plan went to the Austin City Council in July, it was down to a $7 billion initial investment, with the rest dependent on future funding decisions.

To cut costs, the Gold line went from rail to bus; the length of the Orange line shrunk; and the number of new MetroRapid bus lines went from seven to three, among other changes.

There was one addition to spending in the new plan, which happened to also follow the mass protests that took place this spring: the plan increased the amount of money designated for anti-displacement measures from $200 million to $300 million.

Austin, like other American cities with information economies, has an affordability problem. Housing costs have risen, homeslessnes is up, and people of average means are getting pushed out of the city. Transit-oriented development, according to a number of studies and the experience of other American cities, is likely to aggravate the issue.

The anti displacement initiative originated with the city council, which approved a resolution that named as strategies: development of new affordable housing; preserving and rehabilitating existing affordable housing; and rent subsidies and financial assistance for home ownership.

City council members are working on the details of the anti-displacement measures, but questions remain about how effective $300 million can be on its own, and what other steps the city may need to take.

Early-pandemic analysis of the Project Connect situation predicted that the project would be hard to sell to voters in the middle of the economic upheaval, and opposition groups are pushing the cost of the project as a main point of contention.

But even with the cuts—or maybe because of them—the project doesn’t seem entirely doomed, and not only because studies are showing that public transit is unlikely to be a source of transmission for COVID-19. In the wake of protests across the country, progressive turnout in November is likely to be even more robust, and the same events have made equity the center of conversation in Austin. Project Connect has the qualified support of the Austin Justice Coalition, a social justice organization that was at the center of organizing Black Lives Matter protests in the spring, among other groups. On a flier stating its support, AJC cited the statistic that people of color are the most likely Americans to be transit users, and that renters are more likely not to have vehicles.

At public hearings in July, Austin residents raised the spectre of delaying the tax rate election until 2022, when the pandemic will (may) have passed. But to do so would both waste some of the energy and money that has gone into preparing to move forward this year, and also risk losing the masses of pro-transit voters. But it is a risk, because it’s hard to see a third big failure leading to a real rail plan in Austin ever. Despite the pandemic, one way or another, Austin voters will see another rail referendum on the ballot this fall—and the stakes for local transit are high.